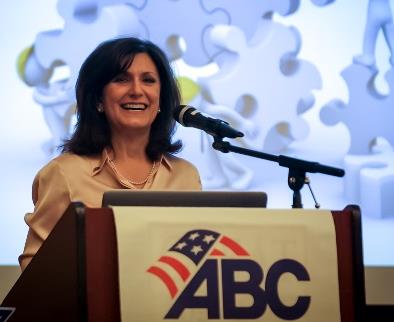 MIDLAND, MI – Earlier this month, the Greater Michigan Chapter of Associated Builders and Contractors, Inc. [ABC] welcomed Angela Latino as its new President.
A graduate of Tulane University, and native of south Louisiana, Angela found herself shifting her career focus after Hurricane Katrina when she had the opportunity to work with volunteer contractors supporting the rebuilding efforts of Habitat for Humanity and the greater New Orleans business community. Soon after learning about the mission of ABC, Latino began her tenure as an Association executive, and is now in her twelfth year, ready to take the helm in Michigan.
“Based on the merit shop philosophy, we help our members develop people, win work and deliver work safely, ethically and profitably for the betterment of the communities in which they work,” reported Latino. Providing services to the ABC membership across the region, while overseeing the operations of a professional staff dedicated to business development, education, and political advocacy, she and her staff are based in the Midland Chapter office building.
Angela appreciates days on the job when she has the opportunity to learn something new and creative from her members and staff, and when she can in turn provide that opportunity to others. Latino beams when talking about ABC and Chapter initiatives, past and future, which allow her team to be the resources the membership deserves; “being of service and knowing your staff gives their best everyday is the greatest reward